At our December 2018 board meeting, board member John D. Keiser, Associate Professor, the School of Business Administration & Economics at The College at Brockport shared some findings from Dacher Keltner’s book The Power Paradox: How We Gain and Lose Influence (Penguin Press, 2016). 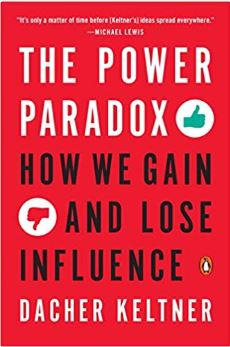 We’ve all witnessed incidents in which someone of higher stature belittles someone in a lower position.  It could be a boss yelling at a subordinate; a first-class passenger screaming at an airline agent; a well-heeled customer berating a sales associate; you get the picture.  It’s bullying, plain and simple.  Except, instead of in the schoolyard, the bully is pushing around the weaker individual at work, at the airport, or on the sales floor.

It makes me wonder how someone so obnoxious could achieve a position in which they feel they have the right to treat others so badly.  Dacher Keltner a Social Psychologist at U.C. Berkeley has dedicated much of his career to this, and from his research, he claims the answer is simply…power.

Power gives people the feeling that they have certain rights and privileges over others.   Power creates what Keltner calls, “empathy deficits,” or a lack of consideration of what others are experiencing.   As a result, power leads to beliefs of exceptionalism and manifests itself in acts of incivility and disrespect.

He has a lot of research to back this up.  In lab experiments in which he asked subjects to match facial expressions to emotions, he found that subjects who had higher social status were less able to correctly match the expressions with the appropriate emotions.  In other words, they were less empathetic to the expressions.

In another study conducted on public streets, he found that drivers of more expensive cars were less apt to obey normal traffic rules. For example; at a four-way stop, drivers of Dodge Colts would cut in front of other drivers about 8% of the time.  Drivers of Mercedes Benzes cut in front 30% of the time.  Similarly, Mercedes Benz drivers ignore pedestrians in crosswalks about 46% of the time, whereas older Ford Taurus drivers ignore pedestrians only about 29%.  Using cars as a proxy for power, the better the car, the less the driver feels they have to honor the rules of the road.

The irony to this is that Keltner argues that powerful people weren’t always this way.  In fact, he suggests that before people reached positions of power, they were probably attuned to others better than most people.  Their empathy was one of the reasons they were able to rise in social hierarchies.  However, once they achieved some semblance of power, their empathy for others diminished, and they felt so special that normal rules of society no longer applied to them.

Fortunately, Keltner acknowledges that not every powerful person is an obnoxious bully.  Powerful people who have maintained their empathy and don’t expect the world to treat them exceptionally, have what he calls enduring power.   Enduring power is stronger, more respected, more permanent, and much more effective than the power that merely corrupts.